On July 13, members of the lower house of the French parliament are expected to vote on a bill that would make it illegal for Muslim women to wear the full face veil – one that covers the entire face except the eyes – in public places. A survey by the Pew Research Center’s Global Attitudes Project, conducted from April 7 to May 8, reveals that the French public overwhelmingly approves this measure; 82% approve of the ban on Muslim women wearing the full face veil in public, including in schools, hospitals and government offices, while only 17% disapprove.

Majorities in Germany (71%), Great Britain (62%) and Spain (59%) would also be in favor of a similar ban in their own country. In contrast, most Americans would oppose such a measure; 65% say they would disapprove of a ban on Muslim women wearing full face veils in public places compared to 28% who say they would agree.

In the four Western European countries studied as well as the United States, support for prohibiting Muslim women from wearing a full-face veil is more pronounced among those aged 55 and over, although majorities in all age groups in France, Germany and Great Britain favor a ban. For example, 91% of French respondents aged 55 and over approve of restrictions on Muslim women covering their faces, compared to 81% of those aged 35 to 54 and 72% of those under 35. 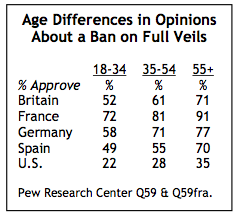 Opinions on banning Muslim women from wearing a full-face veil do not vary by gender in any of the five countries where the question was asked. In France, Great Britain and the United States, views on this issue are also similar across all education and income groups. However, in Spain and Germany, people in higher income groups are more likely than those less well off to approve such a ban; for example, a slim majority (51%) of low-income respondents in Spain are in favor of banning the full-face veil, compared to 62% of those with middle income and 68% of those with high income. 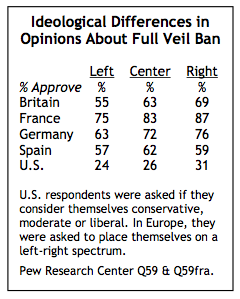 Ideologically, those on the right in France, Britain and Germany are more likely than those on the left to approve a ban on women wearing the full Islamic veil in public places, but majorities across the political spectrum in these countries approve such a ban. In France, 87% of people on the right support the ban on women wearing the full veil in public and 75% of people on the political left agree. Spain is the only western European country studied where people at both ends of the ideological scale express almost identical opinions; 59% of those on the right and 57% of those on the left approve of the ban on Muslim women wearing full face veils. Ideological differences are also insignificant in the United States