Amelia Trainer married Andrew Newell Sanders on June 22, 1892. They established a home in La Vernia, where they raised seven children. Amélia died in 1954.

Did you drive along US 87 in La Vernia and notice the two-story house near the intersection of US 87 and FM 1346 across from St. Ann’s Catholic Church and you are- wondered who lived there or if anyone already lived there? Let’s go back a few years…

Andrew Newell Sanders was born on June 22, 1862, in Seguin, Guadalupe County, Texas, as the fourth child of Leander A. Sanders and Malvina D. Alexander Burnside. He had six siblings: WL, James, Minnie K, Henry, Malvina and Adam. In 1870 he lived in Precinct 1 of Guadalupe County.

In 1880, Andrew was living with his mother and brothers, James and Henry, in Guadalupe County, according to the U.S. Census.

In 1889 he owned businesses and land in La Vernia, according to a binder of letters written to his fiancée, Amelia. Several notes from these letters were kindly shared with the La Vernia Historical Association by Andrew’s great-granddaughter, Melissa Doyle.

On June 22, 1892, at age 30, he married Amelia Trainer, daughter of Captain James Martin Trainer and Martha Alice McGee, in Bexar County, Texas. Martha was the daughter of Reverend John S. McGee, an itinerant minister who served La Vernia Methodist Church. The witnesses listed on the marriage record were PG Scull and J. McGee.

Amelia’s father, Captain Trainer, had arrived in Texas in 1840 and first settled on the Cibolo, before moving to Mount Olive in Bexar County. During the Civil War he served as Captain of Company I, 3rd Texas Infantry and was in the Cibolo Guards. Overseer of the St. Hedwig Road Opening, Trainer also served as a justice of the peace from 1886 to 1908 for Bexar County District 4, which included Mount Olive, Cottage Hill, St. Hedwig and Adkins. He served as a school trustee for St. Hedwig and Mount Olive Schools and was chosen by the Bexar County Democratic Party as a delegate to the Democratic State Convention in Fort Worth on May 23, 1888. He was a member of the Lavernia Masonic Lodge for 42 years. years. 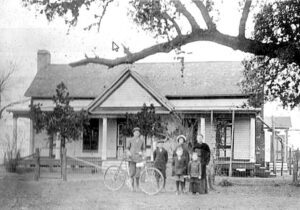 Photos by HISTORICAL ASSOCIATION LA VERNIA
Andrew Newell Sanders (1962-1906) built this home on Highway 87 in La Vernia in the early 1900s. Pictured c. 1912, Andrew’s wife, Amelia (rear, right), is pictured with four of their five sons, (front, from left) Andrew Newell Sanders Jr., Horace ‘Jack’, Alton and Russell; and (in the back) the youngest daughter, Blanche.

Sanders was obviously very much in love with Amelia, as evidenced by a letter he wrote: “If it weren’t for that ‘Trainer Girl,’ it seems to me life wouldn’t be worth living for. lived, and that I have to look to the future without you being just a white man. Another letter read: “I am so happy that you were satisfied with the birthday memory because I reached the peak of my ambition when I made you happy…”

In 1894, Andrew Newell Sanders was recorded as the owner of property in Guadalupe County. On May 14, 1898, he was appointed postmaster at O’Daniel in Guadalupe County. He had other business activities, indicated by a letter he wrote to his wife during the same period, on the letterhead of Elm Creek Co-Operative Association, AN Sanders, director. 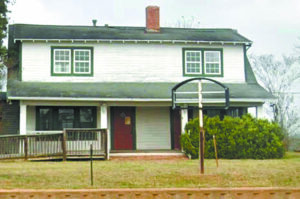 The Sanders House on Highway 87, taken circa 2020, shows the house as many recognize it today, with a second story addition; it is unclear when the top floor was added. Andrew and Amelia’s eldest son, James Leander, who taught at La Vernia, lived in the house until his death in 1971. The house and property were sold shortly thereafter and housed many other families and several businesses over the years. The property was purchased by Yorktown-based The Texan Stores with the intention of developing a convenience store/gas station on the site.

In 1898 he paid occupancy tax in La Vernia under the names Sanders & Canfield, Sanders McGee & Wiseman, and Sanders & Kott, indicating his associations with other La Vernia businessmen.

In 1900 he was listed as a merchant in La Vernia, living in compound 6. He was also a member of the Brahan Masonic Lodge in La Vernia. His wife, Amelia, remained active in the La Vernia chapter of the Eastern Star until 1939.

On February 15, 1906, while serving his second term as Guadalupe County Commissioner, Andrew died at age 43 in San Antonio. Shortly after his death on May 1, his son, Russell Reuben Sanders, was born.

Andrew was buried in the concrete cemetery near La Vernia, Guadalupe County.

According to Melissa Doyle, Blanche’s granddaughter Irene Sanders, Amelia’s father, Captain Trainer, came to live with his family in La Vernia until he moved to San Antonio with two of his other daughters who were widowed and had no children. He liked to take Blanche to Sainte-Edwige to buy her “ginger candies”. Trainer spent much of his time at his daughter’s home in La Vernia, helping to raise and train his grandsons and granddaughters. The captain died on January 17, 1920 in San Antonio and is buried in Mount Olive Cemetery.

Amelia lived in Sanders’ home in La Vernia on US 87 until her health failed. She then went to live with her daughter, Blanche, in Baytown, where she died in 1954.

Andrew and Amelia’s eldest son, James Leander Sanders, a graduate of Texas A&M University and teacher at La Vernia Schools, lived in the family home until his death in 1971. He is buried in the concrete cemetery, with his parents and his brother, Russel.

Shortly after James’ death, his siblings, Blanche and Jack, sold the house – along with all of its substantial grounds – to Fred and Cherry Pierdolla of La Vernia.

Later the house housed other residents and businesses, including Mr. Tim’s country kitchen.

Elaine Mazurek Stephens is president of the La Vernia Historical Association; Susan Duelm Richter is vice-president. A
the bibliography of this story is available on request from the Historical Association of La Vernia; call 210-392-3281 or email [email protected] To learn more about the association, visit laverniahistory.com.

This account was written to record the history of the Sanders family and their important role in the history of La Vernia. The Sanders residential site on US 87 across from St. Ann’s Catholic Church is now owned by The Texan Stores for development. As Andrew Newell Sanders’ great-granddaughter, Melissa Doyle, said, “The hearts out there can never be moved.” This will always be Sanders’ home.